Realme 5s Display Specifications Revealed by Flipkart Ahead of Launch

Realme 5s will launch in India on November 20 alongside Realme X2 Pro.

Realme 5s is all set to launch in India on November 20. Recently Flipkart has confirmed the Realme 5s availability and revealed the few specs via teaser. Now the Flipkart has updated the teaser page to reveal the display size and resolution details.

Realme 5s is confirmed to come up with a 48MP quad-camera powerhouse and 5000mAh battery. The Flipkart teaser page has also shared the official image of Realme 5s on its landing page. The Realme 5s design is similar to Realme 5 and The smartphone will also come with a diamond-cut finish at the back. 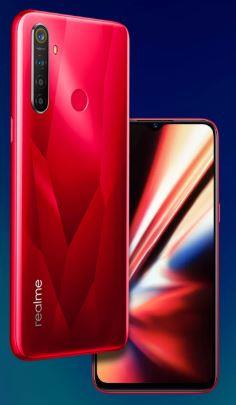 On the front, The Realme 5s will sport a 6.51" HD+ screen. Around the back, it has a quad-camera setup which is placed vertically and there is an LED flash and fingerprint sensor. It was expected to come with a 1080p resolution, but that won't be the case since it will retain the 720p resolution of the Realme 5. The Realme 5s also has a waterdrop notch for selfie camera on the front like Realme 5 and Realme 5 pro.

Further, It is confirmed to be sold in three variants of colors- Purple, Red, and Blue. Realme 5s and Realme X2 Pro will be sold through Flipkart, Realme official website and various offline stores.

On November 20, we will know more about this device.