Samsung unveiled the Galaxy S10 series in March. and it's said to further expand this series with the launch of S10 Lite.

In 2019, Samsung has offered three Galaxy S10 series phones already- S10, S10+, and S10e. After successfully launching these smartphones, the rumor was started that Samsung is planning to add a new model S10 Lite in this lineup before this year ends.

Recently, A new Samsung device with model number SM-G770F has been spotted on Geekbench's database, and it is reportedly the upcoming smartphone Galaxy S10 Lite. And This S10 Lite smartphone is rumored to be an affordable version of the Galaxy S10.

Although there is no official confirmation from Samsung, Geekbench has revealed some key specs on its site. 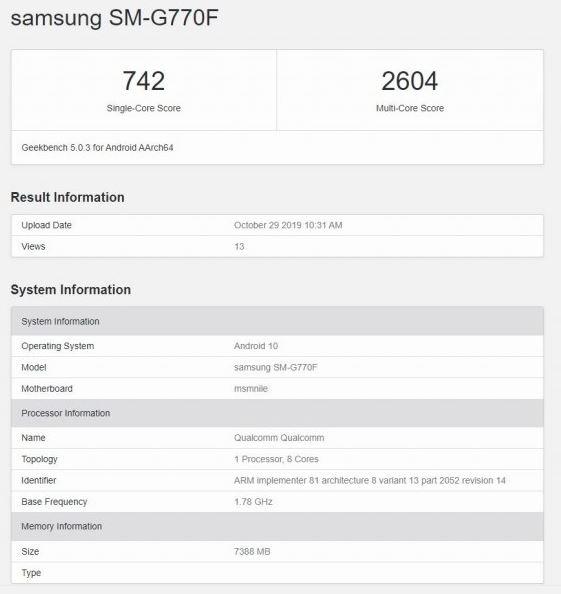 According to the previous rumors and new Geekbench listing, this Galaxy S10 Lite is expected to arrive with a 6.7" FHD+ Super AMOLED display and a 32MP selfie shooter on the front.

On the backside, we can expect this phone would come up with a triple camera setup consisting of 48MP+12MP+5MP sensors. Also, Samsung Galaxy S10 Lite is rumored to feature a 4500mAh battery with 45W fast charging support. and Snapdragon 855 Soc.

The Samsung Galaxy S10 Lite is seen running on Android 10 in the Geekbench list and we can expect it to run on One UI 2.0 top. Further, This phone would come up with 8GB of RAM and 128GB of inbuilt expandable storage.

We need to wait for the official announcement to know more details about this phone.